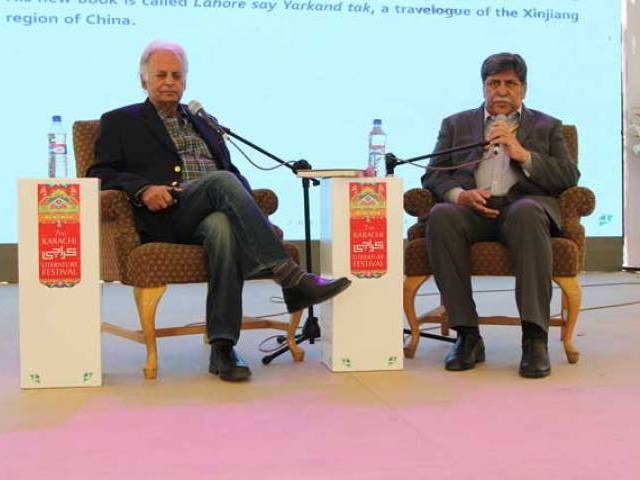 Intizar Hussain sahib was not only a legendary writer, poet and novelist, but was the king of fiction and the long-lived king is now dead, lamented Mustansar Hussain Tarar. He was speaking at a session, titled ‘The story of vagabond – Tribute to Intizar Hussain’, on the second day of the seventh Karachi Literature Festival on Saturday.

People who leave their legacies behind in fact do not die, said moderator Asirf Farrukhi, adding that Intizar sahib will continue to live amongst us through his memories, books and conversations. He added it is not a condolence meeting but Intizar sahib’s life and moral stance was being celebrated.

“Intizar sahib is revered and very well-known by his fiction but his cultural dialogue will also be remembered,” said prominent writer Asghar Nadeem Syed. “Through his dialogues, he told us how human beings are being inhuman.” Whatever he chose to write in his stories, he tried to connect it with contemporary issues so that we learn, he added.

Intizar Hussain – the seller of dreams

“We feel the presence of Intizar sahib in the entire festival,” said Urdu writer and poet Fahmida Riaz. “I feel he might turn up any time. It is hard for us to detach [ourselves] from him.”

Sang-e-Meel Publications chief executive officer Afzal Ahmed said that there was a time when good writers were not bestsellers but Intizar sahib was the writer who was exceptionally good and was the bestselling writer. “Teachers should encourage students to read his books because, if they read them, they will become wiser,” said Ahmed.

Oxford University Press director Ameena Saiyid said that Intizar sahib’s quality was that he used politics in his work. According to her, he discussed the disintegration of Pakistan in 1971, problems of Mohajirs in 1990 and the radicalisation in Ziaul Haq’s era.

Prominent poet Zehra Nigah said Intizar sahib was one of the luckiest writers who received great appreciation for his work. “He is an asset that will never end,” she added.

Fiction writer Masood Ashar said we talk about the effects of Partition but we don’t talk about the reasons of Partition. “Intizar sahib wrote fiction, drama and novel and he had command over [the] Urdu language,” he said. “He was a cultural representative and interpreter.” Talking about his qualities, Ashar said that Intizar sahib had an amazing memory. According to him, he remembered Islamic history by heart. He was the man who revived the tradition of language, he said.

Farrukhi concluded the session on the note that Intizar sahib will continue to live on in the hearts of the people.